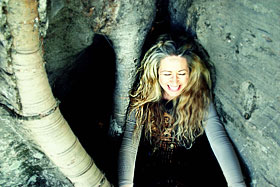 Lucy Cavendish was born on July 5, 1961, in Sydney Australia. From an early age she delighted in the magickal and natural worlds and believed that life was full of wonder and joy.

She believes we all deserve to be free to dedicate our lives to our purpose by simply walking our path. She wishes to share the natural mysteries she encounters every day, and so often between three and four am in the morning, with others so they too can experience the wonder of believing in what lies within and beyond the sight of those who have trained themselves into fearing and hiding from their very natural and very helpful magickal experiences.

Lucy lives her life from the belief that magick is a healthy and empowering natural part of who we are, which, when worked and lived with can assist all of us to live in integrity and experience greater true happiness, health, and abundance. Our happiness and deep joy and living in balance has a ripple effect through our energy, our environments, on our beautiful blue and green planet, and beyond to the marvellous Universe of which we are all a part.

Lucy experienced visitations from beings when very young, which led her on a search to make sense of what she was seeing, hearing, feeling, and what she knew. She read the world’s mythologies and became interested in indigenous belief systems before she was ten years old. After a serious car accident, which saw her hospitalised for many months, and undergoing several lengthy operations, she noticed that while she could no longer see well with her physical eyes (which were damaged in the accident) she could identify and recognise people by their energy, the colour of that field, and the vibration, or feel, of that energy field. Her prophetic dreams became more frequent, and she could sense and feel true intent, no matter what was being “said.”

After lots of adventures and many misadventures, Lucy began working consciously with her magicks in 1987, when she moved to London and fell in love with the tarot. She dedicated herself to its wisdom and energies, and to reading for others, which has continued and is still very much a part of her life today. In 1993 Lucy took her love of magick and divination, the seasons and the cycles of the planet a giant step further and created a magazine she named Witchcraft. This publication sold throughout Australia and New Zealand, and opened up a reliable and healthy source of information to many people in isolated and sometimes hostile communities. Through Witchcraft, Lucy wished to help others as she learned herself, and brought to light so much of the beauty of this ancient and very healing path.

In 2001, Hay House published her Magical Spellcards internationally, and in 2002, the Oracle Tarot was published throughout the world by the same leading publisher of personal growth and metaphysics. Since that time she has regularly appeared on television, radio and print, both in Australia and around the world. In 2004 her television special, Everyone’s a Psychic has aired over eight times on Foxtel’s W channel. Devoted to helping everybody access their intuition in simple, practical ways, Lucy co-wrote and produced the program, as well as presenting it.

She now regularly gives workshops, holds retreats and speaks on her loves; the tarot, divination, magick, witchcraft, and priestess traditions of Avalon, much of which became the bedrock for her book White Magic: An Inspiring Guide to an Enchanted Life.

Since 2007 she has created three meditational CDs: As Above, So Below, Return to Avalon and The Seven Gifts of Faery. The Lost Lands, a Magickal History of Lemuria, Atlantis and Avalon has become a spiritual best-seller, as has the Oracle of the Dragonfae, the Wild Wisdom of the Faery Oracle, and the Oracle of Shadows and Light. Her new book, The Book of Faery Magic, has been written with her friend and collaborator, Serene Conneeley and was released in June 2010.

Lucy still lives in Sydney, Australia, with her pixie-like daughter. She works magic every single day of her life, embracing it as a creed for personal fulfilment and happiness, and as a belief system that sees us as part of nature, and thus gives us all the motivation to respect and revere and delight in our unique experience here on Planet Earth.

She is a feature writer for Australian magazines Spheres and their sister publication, Spellcraft, and for the internationally acclaimed FAE Magazine. Lucy is a founding member of the Goddess Association in Australia, and belongs to the Order of Bards, Ovates and Druids, with whom she has studied. She is a classic book witch and adores writing and reading, playing in the green, being creative, leading enchanted workshop experiences, surfing and the ocean. Perhaps most especially Lucy believes this life is a blessing we create with our every breath, choice, action and contribution.